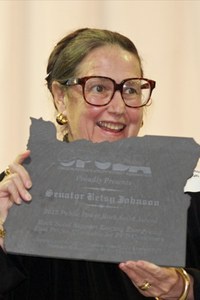 October 18, 2013 – Senator Betsy Johnson has been recognized by the Oregon People’s Utility District Association for her outstanding work in protecting local control for consumer-owned utilities in Oregon.

“Sen. Johnson, perhaps more than any other legislator in Salem, is a citizen of all of Oregon,” said Olson. “After she takes her oath of office, I don’t believe it matters at all to her if someone is a Democrat, Republican or Independent or even a voter. If it’s important to her district or the State of Oregon, Sen. Johnson is all over it. She is truly a voice of reason in a very partisan environment. She is not afraid to go against her party or speak her mind. Oregon could use more legislators like Sen. Johnson.”

During the recent legislative session, Senator Johnson worked closely with OPUDA to champion legislation that reduced the cap on the energy supplier assessment and created transparency in the use of the funds for the Department of Energy. She was also a key vote in opposing the removal of the 2015 sunset on the Low Carbon Fuel standards. A long time friend of OPUDA, she continues to ensure that the locally elected Boards retain local control in setting policies for their Districts keeping the cost of power affordable for our customers.

The Oregon People’s Utility District Association is a trade association representing Oregon’s electric and water PUDs. The mission of OPUDA is to influence state legislation and regulation to benefit the customer-owners of Oregon people’s utility districts, and provide focus on related interests of its member PUDs.