PUD Board Approves Balanced Budget for 2016 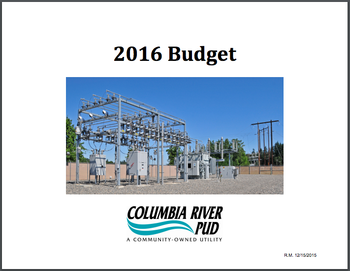 December 16, 2015 – The Columbia River People’s Utility District Board of Directors has approved a $33.8 million Operating & Capital Budget for 2016 that will hold rates steady, maintain cash reserves, and fund $2.5 million in system maintenance & improvement work. No rate changes are planned.

The Board held a budget hearing at the beginning of their December 15, 2015, regular board meeting. Accountant II Tracy Pinder provided an overview of the major cost drivers in the budget and answered previously submitted questions from the board about taxes and debt service. Following her presentation and an opportunity for public comment, the budget was unanimously adopted.

PUD Board Member Craig Melton thanked PUD staff for developing a balanced budget on such a short timeline. The PUD’s budget process started a month late due to a delay in the rate setting process this summer. After receiving input from customers at an August rate hearing, the Board asked staff to revise the proposed rate schedules to incorporate customer suggestions, and then adopted new rates at their September meeting.

“I know we put you on a short timeline,” said Melton. “You came through with a balanced budget and I know you worked long hours to get it done. Thank you.”

Board Vice President Jake Carter added to Melton’s comments. “John and his staff did a great job putting together a budget that focuses on providing affordable, reliable service to customers,” he said.

The increased wholesale power costs were offset by reductions in payroll, materials, capital equipment and other controllable expenses.

“Our staff did a great job of finding ways to do more with less for 2016,” said Interim General Manager John Nguyen. “We will provide the same quality service that the PUD has always been known for, while internally we are working hard to keep costs down to help keep rates affordable for customers.”

The PUD’s year-end cash reserve balance is projected at $8.2 million, which is equal to the cash reserve target set by the Board of Directors earlier this year. No additional debt is planned, and the PUD remains on track to pay off all long-term debt by 2020.