PUD Board Adopts $35.2 Million Operating and Capital Budget for 2017

December 22, 2016 – During its December 20 meeting, the Columbia River People’s Utility District Board of Directors approved a $35.2 million Operating and Capital Budget for 2017. 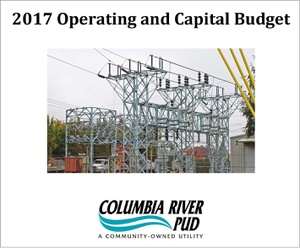 “This budget was developed to ensure we can continue to serve customers reliably and affordably, and that we are ready to serve the growth that is expected in our service area,” said Interim General Manager John Nguyen.

Electric rates will remain stable at least through September 2017, but may change in October 2017, when new wholesale power prices take effect. The PUD’s current residential rates, which were set in October 2015, are 31% lower than the statewide average and 43% less than the national average.

The budget was set with input from the PUD Board, PUD staff, and a customer Budget Advisory Committee. That committee includes representatives from the PUD’s residential, commercial, and industrial customer classes, as well as advocates for low-income and senior citizens.

“I think the staff has done a wonderful job putting together this budget,” said Budget Advisory Committee Member Bill Eagle. “It’s clear and understandable, and the public will support it.”

Customer work, system improvement projects, new equipment, and technology and facility improvements combine for $2.8 million in net capital expenditures. The largest capital expense in the budget is the land purchase for a new substation in Scappoose, budgeted at $300,000. This purchase is the beginning of a three-year project to site, design, and construct a new substation to accommodate anticipated growth near the Scappoose Industrial Airpark. Improvements are also planned for three existing substations in the PUD’s service area. Other infrastructure upgrades will ensure the safety, security, reliability, and capacity of the distribution system.

The PUD is projecting that pricing from its wholesale energy provider, Bonneville Power Administration (BPA), will increase beginning October 1, 2017. Wholesale power prices are projected to increase by 3.5% and transmission prices by 2.0%. The actual amount of the increase will be known in July 2017.

The PUD will conduct a Cost of Service Analysis in 2017 to determine whether any rate changes will be necessary. The COSA study includes:

Operating revenues are anticipated to increase by 1.5%. The energization of a new large industrial customer in the second quarter of 2017 is the largest driver of this increase, along with planned construction of new housing subdivisions in the Scappoose area.

The PUD’s annual budget is guided in part by Policy 2-23: Cash Management. This policy sets a minimum cash balance for the PUD to operate within to ensure cash is available to meet the day-to-day operating needs of the PUD, to provide for unexpected events such as natural disasters, severe storm damage or floods, and for capital equipment and construction expenses. The minimum cash balance for the PUD in 2017 has been set at $8.1 million. The 2017 budget results in a projected year-end cash balance of $8.16 million.