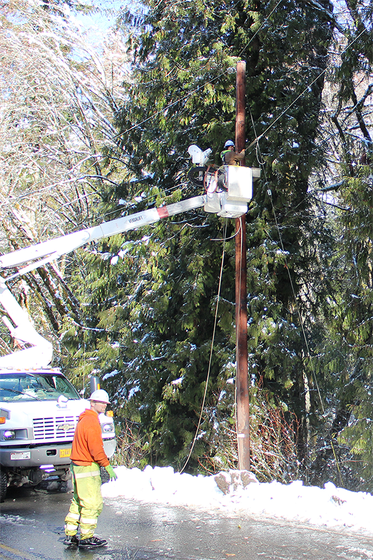 “We would patrol a line and it would be fine. Then we’d turn around to come back and see a tree had come down through it,” said Journeyman Lineman Travis Weber.

Crews were forced to make repeat repairs to the same trouble spots when additional trees or branches fell after the initial repairs were made. Reworking a stretch of power lines is all part of a lineman’s job, Weber said.

“I’m sure it’s frustrating for the customer to have their power come on and then go back off again,” Weber said.

The PUD received its first reported outage at 12:25 p.m. on Sunday, February 5. The majority of the outages affected PUD customers in the Rainier area, although outages were reported in Scappoose, Warren, St. Helens, Deer Island, and Goble as well.

PUD crews worked through the night Sunday into Monday, restoring power to all customers by 6:05 p.m. on Monday evening.

During the restoration effort, the PUD received reports of snow as deep as 22 inches in some areas.