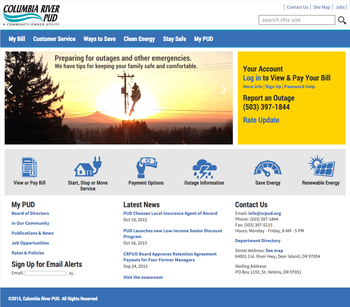 “Your entry represents a committed effort to excellence on the part of your utility and your communications department,” said Sue Kelly, APPA President and CEO.

APPA conducts the Excellence in Public Power Communications competition to encourage and recognize excellence in communications. The contest has traditionally focused on utility annual reports and was reorganized this year to feature the categories of print, social media, video, and web. The PUD has previously received five awards for its annual reports.

“We have created a user-friendly and information-filled site at an affordable cost,” said Interim General Manager John Nguyen. “I am glad APPA recognized our commitment to excellence in communications with this award.”