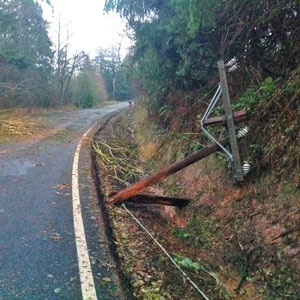 February 23, 2016 – The Federal Emergency Management Association (FEMA) announced last week that federal disaster assistance has been made available to Columbia River PUD and other public agencies in Oregon to supplement recovery efforts in areas affected by severe winter storms, straight-line winds, flooding, landslides, and mudslides during the period of December 6-23, 2015.

On December 21, heavily saturated soils and high winds combined to create the biggest power outage in PUD history. Downed lines were reported on more than 150 roads in the PUD’s 240-square mile service area, and 80% of the PUD’s 18,700 customers experienced outages. Eight agencies sent a total of 10 mutual aid crews to assist the PUD in the restoration effort, which spanned five days.

The total cost of the PUD’s outage restoration was $550,000. The FEMA reimbursement is expected to cover up to 75% of qualifying expenses.

“We have cash reserves set aside to cover events like this, but the FEMA reimbursement will keep us from having to draw on them. In the long run, this will help us keep rates stable for customers,” he said.