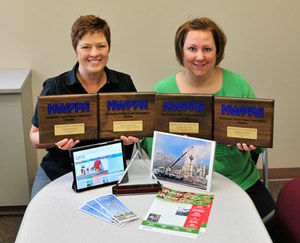 “This is a great achievement for the PUD,” said PUD General Manager Kevin Owens. “This award recognizes the quality, consistency and effectiveness of our customer communications.”

Columbia River PUD is the first two-time recipient of the Tom Hougan Award, having first received it in 2007.

Calnon credited her co-workers at the PUD for the recognition.

“I’m lucky to be surrounded by people who are committed to providing excellent service to our customers,” said Calnon. “It’s an honor to be recognized for our communications work, and I’m looking forward to celebrating with all of the people at the PUD who helped us earn this award.”

In addition to winning the Tom Hougan award, the PUD won awards in five of the seven categories of competition. The PUD’s website received a perfect score and earned first place in that category. The PUD also received first place awards for its customer newsletter, for a customer brochure, and for photography, and a second place award for its annual report.

The NWPPA is an organization of over 150 public/people’s utility districts, electric cooperatives, municipalities and crown corporations who serve approximately 5 million customers in the Western U.S. and Canada.