January 18, 2017 – Armed with a pair of 4-wheelers loaded down with equipment, five Columbia River PUD linemen trekked up a treacherous driveway outside of Scappoose the morning of January 12 to complete their outage restoration work from the January 10-11 snowstorm.

Crew Foreman Lewis Cutler began working at the PUD in 1990. He said it’s the first time that he can remember PUD crews needing to use 4-wheelers to reach a service pole.

Cutler and Serviceman Chuck Long both volunteered the use of their personal 4-wheelers for the job. After working day and night to turn power back on to nearly 2,000 PUD customers, one house remained without power after dark on Jan. 11. Operations Supervisor Eli Crape walked the driveway – which Cutler compared to a logging road – and knocked on the door of that house on the 11th with no answer. Because access to the house was so difficult and it appeared no one was home, the crew decided to return in daylight hours when restoration work would be more safe.

When discussing how to tackle the driveway the next morning, Long suggested using his 4-wheeler. Cutler said he’d grab his as well. They hauled them to Scappoose and set out to restore power.

“We counted eight trees across the road. It was kind of hard going,” Cutler said. “The quads barely made it.”

Once there, they discovered the 200-pound transformer would need to be replaced. A new one was delivered from the PUD office, strapped to a board, and pulled behind one of the 4-wheelers up the driveway. Crews then attached it to a pulley system, secured the transformer on the pole, and restored power to the home at around 2 p.m. on Jan. 12. 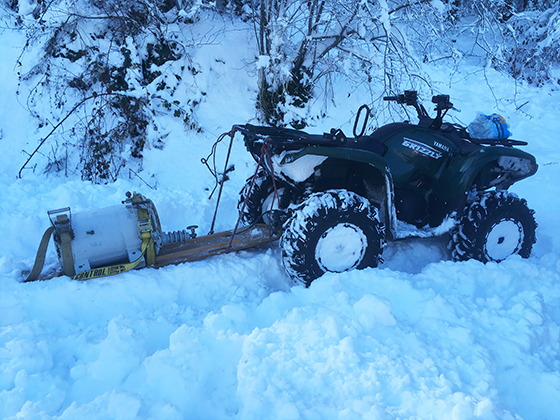 The unique repair job finalized the restoration work for this widespread outage. The PUD received its first outage call around 11 p.m. on Jan. 10. Power was restored to all customers – other than the home accessed by 4-wheeler – by 11:15 p.m. on Jan. 11. In total, there were 58 individual trouble spots affecting 1,967 customers. The average outage length was 4.5 hours.

As much as a foot of snow was measured in parts of the PUD’s service area.