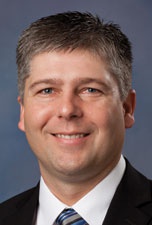 January 25, 2013 – At its January 15 meeting, the Columbia River People’s Utility District (PUD) Board of Directors welcomed Jake Carter as the new representative of Subdivision 4 customers in St. Helens. Mr. Carter won a seat on the board during the November election and replaced Darrel Purkerson, who had represented Subdivision 4 since 2000.

Carter is employed at IBEW Local 125 in Portland as a Business Representative for several utilities and is a former employee of Columbia River PUD. While employed at the PUD, Carter held the positions of Meter Reader, Groundman, Apprentice Lineman, Lineman, and Meter/Relay Lineman.

Carter and his wife, Danette, live in St. Helens and have three sons.

“I’m looking forward to representing St. Helens on the Board,” said Carter. “My background and experience will allow me to help the PUD continue to provide customers with safe, reliable and affordable service.”

In addition to Carter’s election, the November vote resulted in Subdivision 1 Representative Dave Baker and Subdivision 3 Representative Richard Simpson being re-elected to their seats. Both were sworn in along with Carter at the January Meeting.