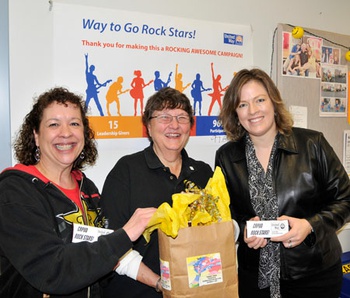 November 6, 2011 – Columbia River PUD employees rocked the house during this year’s United Way campaign. They raised $20,207 for the local chapter – a 23% increase over last year’s total.

Campaign Coordinators Libby Calnon and Sherry Welter chose a Rock Star theme for the two-week campaign. Each contributor was honored with a rock star silhouette in the “Hall of Fame”. Forest Leadership donors also received gold records in honor of their contributions.

“Our employees are always very generous during our United Way campaigns,” said Welter. “They really are rock stars when it comes to supporting the community.”

According to Columbia County United Way Executive Director Kathye Beck, PUD employees were the highest per-capita giving group during the 2006, 2008 and 2009 campaigns. This year’s average gift of $421 is likely to garner the same recognition.

Fifteen people, nearly one third of the PUD’s 48 employees, earned a spot on the Forest Leadership Giving honor roll, having donated $500 or more. That percentage of leadership givers is unequalled in the county, said Beck.

“Our employees never cease to amaze me with their generosity and volunteer efforts in this community,” said PUD General Manager Kevin Owens. “Our campaign co-chairs offer unique twists to promote giving and always seem to find a unique blend of fun, prizes and food that keep us focused on our community’s needs. This year they truly rocked the house!”