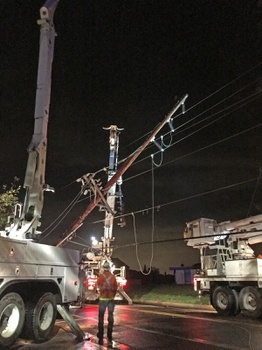 A vehicle crashed into a pole on Dutch Canyon Road and snapped the pole in two. The pole that was hit housed transmission lines carrying power from Bonneville Power Administration into Columbia River PUD’s Dutch Canyon Substation, in addition to distribution lines that feed power into the Dutch Canyon area.

The outage affected 2,762 PUD customers, including Scappoose High School, where the SHS football team was hosting Astoria for its Homecoming game. The game was postponed until October 22.

PUD crews were able to re-route power from neighboring Scappoose Substation to return power to more than half of the affected customers by 10:16 p.m.

Crews then installed a new power pole to replace the one that was hit. After energizing the transmission lines, they were able to return power to another 1,139 customers by 1 a.m.

Power was restored to the remaining 29 affected customers just after 5 a.m. on October 22, once crews were able to repair all distribution lines.